such a cute little game, i got attached to the characters and genuinely cried a lil when i had to pick one. so good!

This visual novell is pretty

this game was nice

Really cute, all endings are easy to get.

So cute omg, i loved this <3 the true ending was adorable

I cannot get this game to open up at all on Windows 10.

Whenever I try opening it, I can see the window for it pop up, but then it immediately closes. I've tried several other similar games, and they all seem to work fine, so I'm not sure what's going on. :(((

Any suggestions that I could try? I'd really love to play this game but just not having any luck rn. I've tried both the 64 bit and 32 bit versions, btw.

If the game chrashes, there is probably a “traceback.txt” in the folder. Use something like https://paste.debian.net/ to share it with us (just pasting it in an itch comment doesn’t work too well). Once you have clicked send you will need to copy the URL at the top of your screen/browser, it will be like the link I shared but with a bunch of numbers at the end.

I actually ended up just booting the game through command prompt and it's working fine now.

Thanks for the reply though. :)

Incredibly well made! Excellent work, excited to play the sequel~~ 💘

This has got to be one of my favorite visual novels ever, all the characters are lovable and funny! The art is fantastic and the true ending is perfect! I can't even choose who my favorite is but it's probably Yuki herself lol. Wonderful game!

Cute gayme. Got all 5 endings. Yuki, can I borrow Chinatsu or Haruka for a bit?

This was so soft and sweet! I was mad at the choices at the end but then I got the true ending that I wanted :')

im glad there was a true end,,,, i was yelling at my screen for it to happen since the start of the game hahaha

this was absolutely incredible!!!!

the art style is so cute and i LOVED the different sprites. the trans flag and lesbian flag hair highlights were amazing! the spotlight effect when spica was first introduced was so impressive too, from one visual novel creator to another!

i kept laughing every few seconds whenever spica was flirting around, but this silly game had a lot of heart and i wound up getting genuinely attached to all of these girls. i'm super glad that they're all happy!

thank you for an amazing visual novel!

Hi, the game looks great, but when I double click on the application it loads a bit but nothing pops up. Am I doing something wrong? I am using a windows 11 laptop.

hi! i’m sorry to hear that! would you mind taking a screenshot of the error?

ahh!! sorry i don't think i'll be of much help as i don't use a windows computer, but maybe restarting would help?

Hi, so I redownloaded the game and now it works. Yay! \o/ Thanks

glad to hear that!

such a cute and lovely game! the art was amazing and made the gameplay 100x better ! love it !!!

I played this through completion this time (only finishing one ending the first time I played) and I can say, I absolutely love this game! It is super charming, the art is wonderful, and I love the ending :) Great job on it, I saw on your Instagram and Twitter you are making a sequel, excited for Yuki's 4Ps 2! I plan to play all your games~

yuki's thoughts are literally my inner dialogue when im around girls

I'm clearly not the target demographic for this game, but I played it anyway and had a good time. This is a very sweet game and has pretty high production values, especially considering the fact it's free. I do have a few minor criticisms though. I'll order them from most objective to most subjective. 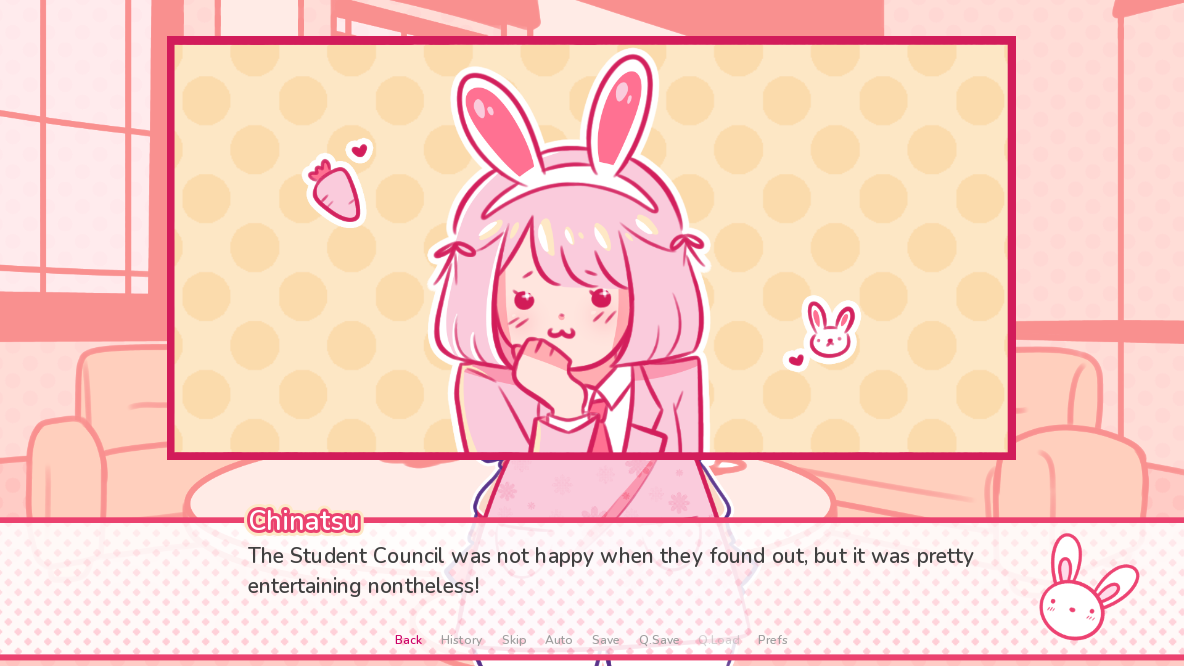 "Nonetheless" is missing its first E. 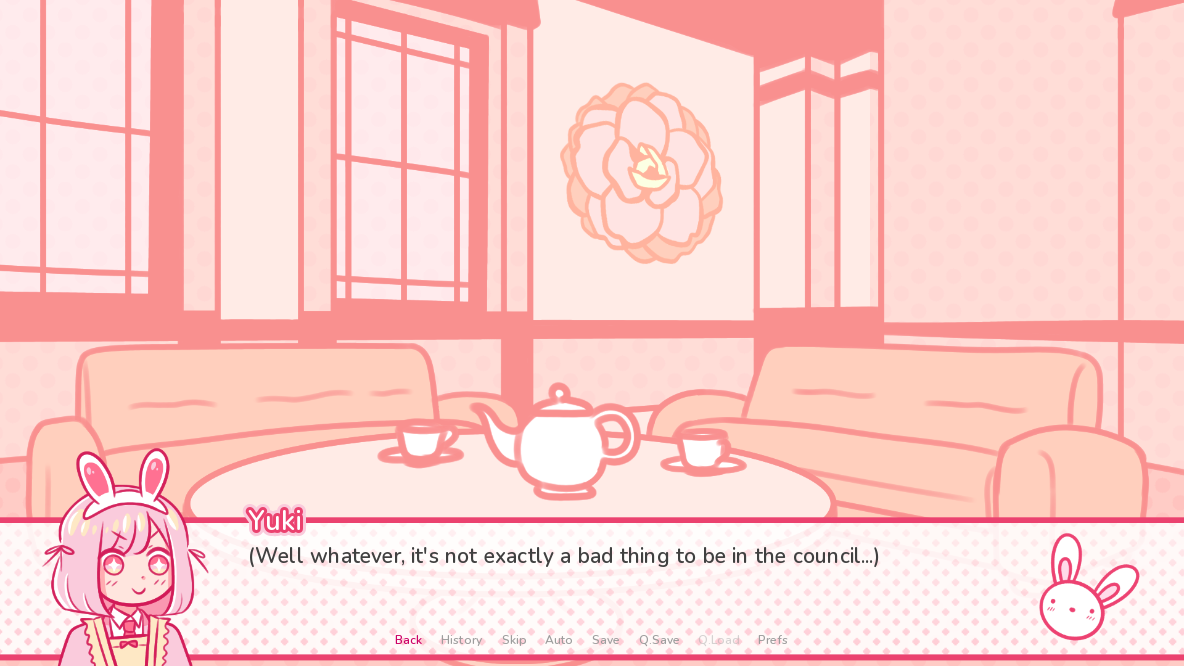 It should say "on the council" not "in the council". Don't ask me why, English grammar can just be weird at times.

So I played Yuki's 4P on my Chromebook using its Linux container to run it. Unfortunately, the Linux terminal doesn't generally accept punctuation in file names. Because of the apostrophe in "Yuki's-4P", I had to rename some of the files in order to launch the game. Not a huge problem, but something to be aware of if the dev plans to release more games for Linux. 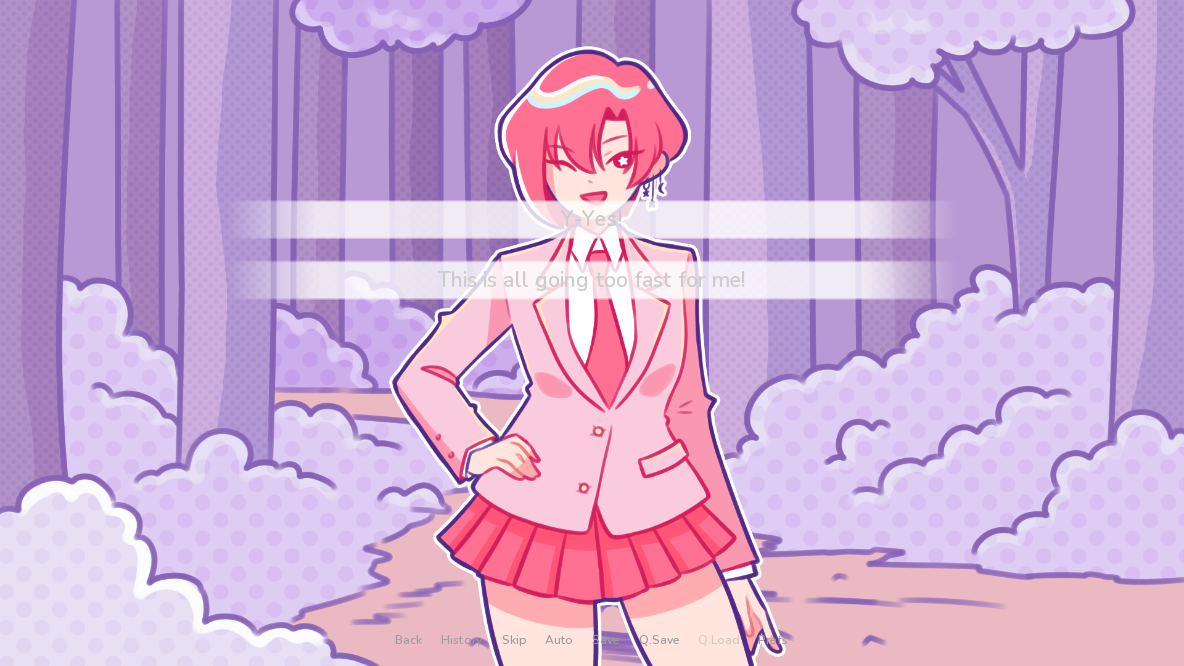 As a fellow Ren'Py dev, I know why this is. This white text is, for some reason, the default when you select white as the GUI colour for your project. Thankfully, there's an easy fix. Just change the hex colour value in gui.rpy. 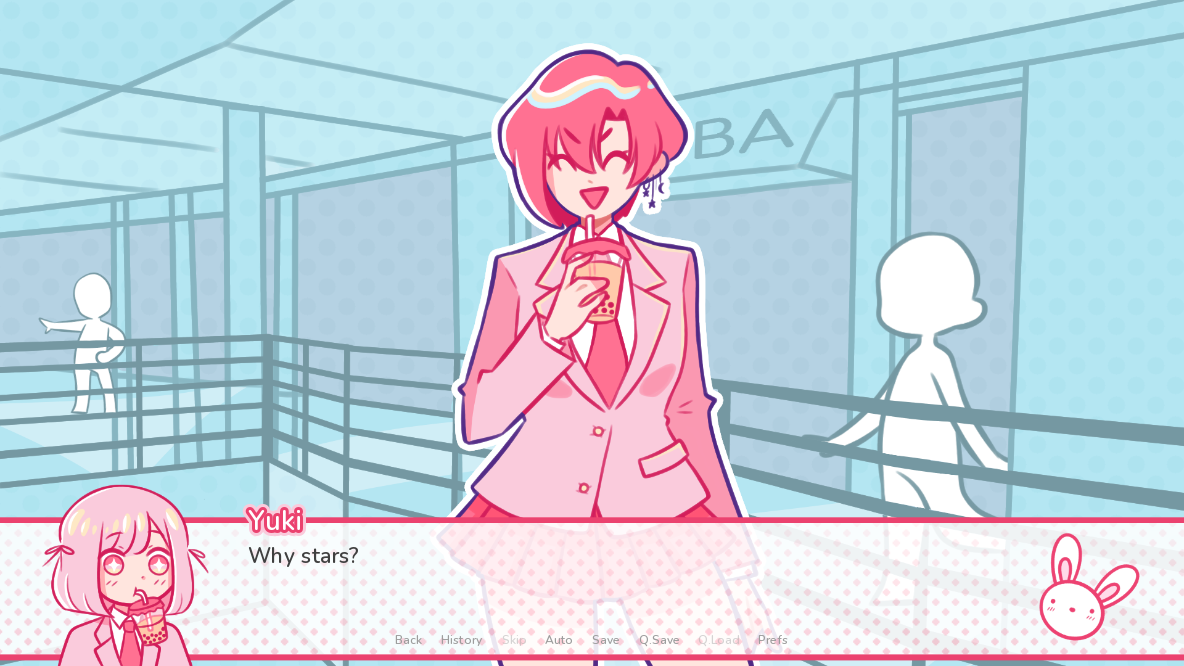 Yuki isn't holding the cup in her portrait. This looks very unnatural and it drew me out of the moment.

This is purely my opinion, but I'm not a huge fan of Yuki's and Chinatsu's last names. I see what the dev was going for, but I think they ran too far with this joke, so it just appeared lazy. Personally, given the Japan-esque setting, I would have translated them into katakana and then to romaji. So Lastname would become "Rasutoname" and Familyname would become "Famiriname". That way the joke could be maintained, but it wouldn't be so painfully obvious.

do you have any plans for a android download?

Lovely game! Spica pls have my hand in marriage

is to shoort,i love this game ,i need a sencond part or something

This game is adorable and funny. I love it

Hey, just finished all the endings and I wanted to say that I really enjoyed the ride ^^ it was really funny! And really cute uwu

Wish you good luck on any future projects you have! uwu

this is the dumbest most unrealistic videogame ive ever played

What a fool you are!  What a grand and intoxicating innocence! How could you be so naive? There is no escape. No recall or intervention can work in this comment. Come, lay down your argument, it is not too late for my mercy.

Love it! I made a video with complete oral translation to Chinese of 4 endings herehttps://www.bilibili.com/video/BV1Qq4y1K7kL

but can't figure out how to get the fifth ending... I only got the basic 3 and the "true ending".

hi thank you so much for this!! it's so cool to see a playthrough of my game in my mother tongue >w<

to get the fifth ending you just have to return to the final choice! a fourth choice should be available after getting all the other endings ^^

And I did get the ending where the fourth choice appears, I got that one and the three endings required for it to appear, but I have no idea where the fifth(first?) ending is.

Even if it was short, i love the whole game and got all five endings! I love it <3

I have only done the basic 3 girls' endings so far, but I love all of the girls.

Also, as a trans woman myself, I recognized Haruka being trans from the second Yuki didn't recognize her right away. lol

Spica is the kinda woman I wish I was, but in reality, I'm actually pretty similar to Haruka. lol

Especially the thing on the hair... It reminds me of the trans flag! (I also love their surnames lol-) And your artstyle completes everything! It's so cute ヾ(≧▽≦*)o

This was adorable!!! I may or may not have squealed a few times while playing lol, the true ending though AHH!!  Basically I loved it

i loved the true ending sm!! the art and music/sfx were also so wonderful!

ahhhhh I loved it so so much, spica's my favorite but I also really liked haruka's date!

I can't wait to see more from milkkylemon :D

great visual novel it was fun and cute :)

One of the cutest story games I've ever played!

I really enjoyed it <3